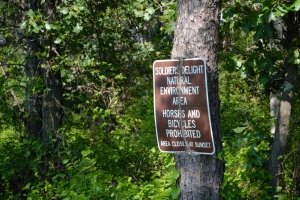 In our society, the veil of civilization is at times peeled back to show the fine line between what constitutes ‘civilization’ and utter chaos. Apparently, laws really are optional, and pleas for forbearance on behaviors must only apply to a minority of people.

One area where I’ve noticed this in recent months is in the midst of doing outdoor activities. Of course, on the trip to and from locations, I see an incredible number of drivers talking on cell phones and texting, despite it being against the law.

The first example was during a day hike at Cunningham State Park. There’s a trail that leads to falls. I hadn’t been there in a long time, so the built-up trail that ended with a platform area for viewing the falls was new to me. Posted signs state that you need to say off the area around the falls, and one stated that it’s a delicate environmental area. That didn’t stop the horde of people who were on the outside of this decking platform, frolicking in the water after tromping through that sensitive environmental area. One man, who was carrying a baby, could barely gain foot-purchase on the slippery rocks. It was mind-boggling, the number of people looking for ways to circumvent the guided trail in order to get to the water. The rules didn’t apply to them. Delicate environmental areas are a concern for someone else—not to be a hindrance to their wants.

The second example was during another hike at Soldiers Delight Natural Environment Area, there is a prominent sign at one of the trailheads that states bicycles are prohibited. I was walking on the trail, zoned out in a nice, nature-induced meditative state, when I was shocked out of it by someone behind me saying, “Excuse me.” It was a guy on a mountain bike. The rule didn’t apply to him. Or maybe he justified it as he rides a “bike” and not a “bicycle,” if you’d like to twist yourself into a knot to give the benefit of the doubt. (In which case, he should have had a guardian accompanying him since he can’t navigate the real world and understand meaning.)

The third example was during a kayaking jaunt at an area that’s a proposed national marine sanctuary in the Potomac River: the Ghost Fleet of Mallows Bay. These are scuttled ships dating back to World War I. It’s a historic site, and there are signs requesting that people stay off the shipwrecks. However, two boaters had pulled up into the exposed back of one and climbed aboard to set up a tripod—scaring off the osprey nesting there—and take cheeky selfies. Rules—and respect for something historic that can’t be replaced—did not apply to them.

It’s a challenge to not get disgusted with all people, based on the actions of the few. (Actually, at the Falls, it was the masses scrambling all over the sensitive area–the few were on the built-up pathway.) And because my mind bends in that what-if direction, it’s even more of a challenge to not extrapolate out to a wider context with higher stakes. What if the SHTF (“stuff” hit the fan) and it was more than delicate environmental and historic sites at stake? One would hope people wouldn’t be so glib about following the rules that are in place for the common good.

Expect the best, until proven different? Or be prepared for the worst, and pleasantly surprised should you see the best? I’m hanging onto hope should we ever find ourselves in the midst of an apocalypse.